The purpose of the meeting was to showcase a variety of new projects & projects starting in the neighborhood, highlight upcoming events, as well as provide updates to some of the on-going work SPAR has been focusing on. 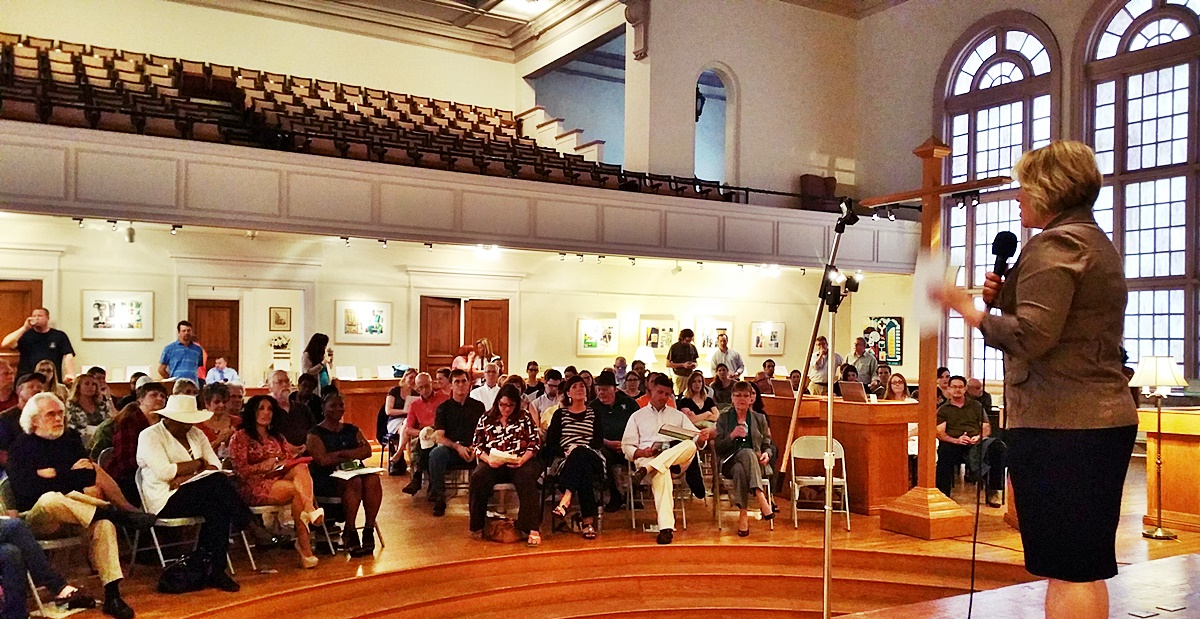 The meeting began discussion of The Drew Mansion. Crissie Cudd, local Realtor, introduced the new owner of the property: Michael Bourre, of Bourre Construction Group. Michael talked about his recent purchase of The Drew Mansion, the deteriorating Jacksonville architectural landmark on the corner of W. 3rd Street and N. Pearl Street. Michael explained how he originally wanted to purchase the home in the mid-2000's to restore, but when the housing market crumbled, he backed off. In recent months, an associate of Michael's was spending time in Klutho Park, which borders the property, and noticed that The Drew was for sale again. Upon much consideration and due diligence, Michael decided to take on the project for two reasons: (1) It's an important piece of Jacksonville history (2) He plans to use it as a showpiece project to demonstrate his company's quality of work. Michael described how he plans to meticulously restore the property, using original pieces and materials where possible, and expects the restoration to take about 2 years, with emergency roof work starting immediately. The total job will cost about $800k, and once completed The Drew will serve as an office for Bourre Construction Group, as well as a show piece of their work.

The second featured speaker was Dawn Emerick, newly installed Executive Director of Groundwork Jacksonville, the new non-profit dedicated to improving the Hogans Creek and Deer Creek park systems in Historic Springfield and the Eastside neighborhoods. Dawn explained how the group is just getting organized, currently has two full-time employees, first year goals put in place, and a long-term strategic plan to be developed later this year. First year goals include developing plans for a connection between Hogans Creek park system and the S-Line, founding of youth group called "The Green Team" to do environmental projects, and a bioswale area, among other items.

The last featured speaker was Christie Holchek, Director of the Art in Public Places program of the Cultural Council of Greater Jacksonville. Christie spoke about a new urban core public art program that has begun in Downtown Jacksonville, and will develop in other urban core neighborhoods (including in the Springfield historic district). A large giraffe sculpture, which the community recently raised funds to purchase, will be maintained through this program, as well.

Updates on several on-going SPAR efforts were given, including about new artistic bike racks (installed) and street light banners for commercial streets (ready soon), signage standards improvements in the Springfield overlay (delayed due to upcoming election) and discussions with City of Jacksonville about local traffic concerns (COJ due to provide their feedback from a February meeting in early April).

Lastly, community advocate and former SPAR board member Christina Parrish was announced as the new Executive Director for the organization. It was also mentioned how Christina recently won an award from local media for her work on PorchFest, and how SPAR was recently honored by Mayor Alvin Brown & Greenscape of Jacksonville with a "Best Civic Organization" award for prolific tree planting and clean up efforts in the neighborhood.

Before wrapping up, an announcement about membership was made, and an audience member announced that the on-going process of COJ converting it's informal policy of lien reductions for sale of neglected properties, into a formal policy, has been completed.

About 100 people attended the meeting, ending at 7:40pm