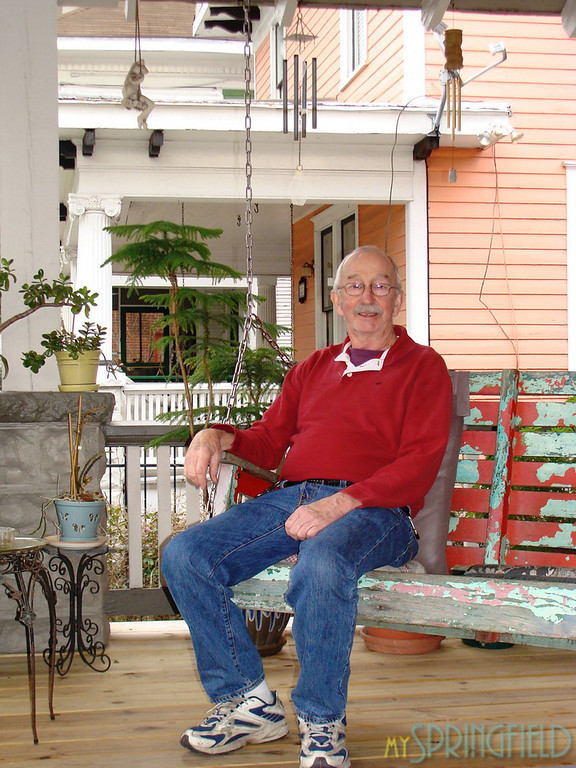 Fun Fact: Robbie makes it his mission to make everyone around him laugh. He declares it, "one of my purposes in life".

Q: What brought you to Historic Springfield?

A:  In 1985 I was living in a little house off San Pablo Road. My parents were older and I was taking care of them as well. Our landlord decided to sell the house, so I started to look elsewhere.

I first became aware with the area when I was much younger, in the Navy. After the bars would close, me and my buddies would drive around the city a little bit, and often drove through Springfield. I had a friend or two in the neighborhood as well, so I was somewhat familiar with it. And I loved the old style of houses, with the big front porches, high ceilings, attention to detail, stained glass, etc. I grew up in similar houses in the mid-west, so they felt comfortable to me.

I thought why not move to Springfield? I could get a big house for me and my parents at a very low price. As far as the crime at that time, well, I had heard it was bad there from everyone. But I didn’t see it personally, maybe by coincidence. So that didn’t dissuade me at all.

Q:  What were some of your concerns at the time you moved in?

A: Drug dealers mostly. Like I said, I never felt afraid here, even when other people did. The drug dealers were more of a nuisance than anything. They used to deal in the alley right beside my house. I would sit on the front porch and watch them. One day I got up and asked them if they could just move to the other end of the alley where no one was living…..and they did! Of course I would call JSO on them all the time, but the police they didn’t seem to know what they were doing back then. I know other people had some pretty bad experiences with crime back then, but I always had a positive attitude about it.

Q: What are some of the most memorable experiences you’ve had in the last 25 years here?

A: I’ve had a lot of memorable experiences with my house. I bought the house in 1985 for 21k. It had been converted into a duplex, so I had a lot of work to do. I did most of the interior aesthetic work myself, restoring the original plaster walls, woodwork, and even a couple chandelier light fixtures. But the electrical, plumbing, siding, pillars, and other things had to be fixed too. I did a good enough job so that my house has been on 5 home tours, from 1987 to 1994.

I’ve also had an opportunity to learn about the history of my house. It was built in 1911 by Eugene Noggle, who was the editor of Metropolis Newspaper, the largest paper in state of Florida back then. He moved away just 2 years after building the house. After he moved it was used as school house and a dance studio, among other things. I have old black and white photos in my hallway of it being used as both.

Q: How have you seen the neighborhood change since 1985?

A: It’s been a roller coaster ride! Small ups and downs. People used to come into the neighborhood, fall in love with houses, start to fix them up, but then get scared off by the crime. That was pretty common. Now, with crime not so much of an issue anymore, there’s nothing to hold the neighborhood back. I’ve seen a big difference in the last 5 years alone, which is amazing.

My street has changed a lot too. When I first moved in, I owned the only car on my block and almost every property was a rental. Now, almost everyone is a homeowner and there are cars everywhere, of course.

Q: What do you most enjoy about living in the neighborhood now?

A: The same things that I’ve always enjoyed: sitting on my front porch and chatting with neighbors. Saying hello to people as they walk by. Meeting new neighbors. This truly is a friendly front porch neighborhood.

And I’d be a fool to forget about Three Layers Cafe, my favorite spot in the neighborhood. It’s just around the corner, which was a real problem when they first opened. I was there, literally, three times a day for the first month! I’ve gotten a little better since then.

A: I’ve participated in almost all of them at one time or another, especially SHADCO (Sheriff’s Advisory Council) and SPAR (Springfield Preservation And Revitalization). I never miss a SHADCO meeting. It used to be easy to see and know where the crime issues were happening in the neighborhood, because it was so obvious. Now it’s much harder to tell! So SHADCO keeps me informed of what’s still an issue and what isn’t.

A: Well, the economy has really slowed things down of late. There’s still a lot of renovations and revitalization happening compared to other areas, but when the economy comes back I think you’ll see a boom again.

I think the city will finally get around to refurbishing all the Hogans Creek parks too, and more neat cafes like Three Layers will open up. I know some already have, but I just haven’t been by to try them yet.

Q: What advice would you give to people considering making a move into the neighborhood?

A: Do it! Take the plunge! Meet the people. Get out and look around the neighborhood. It’s especially easy to meet your would-be neighbors here, and everyone so friendly. We’re more social than most I guess. 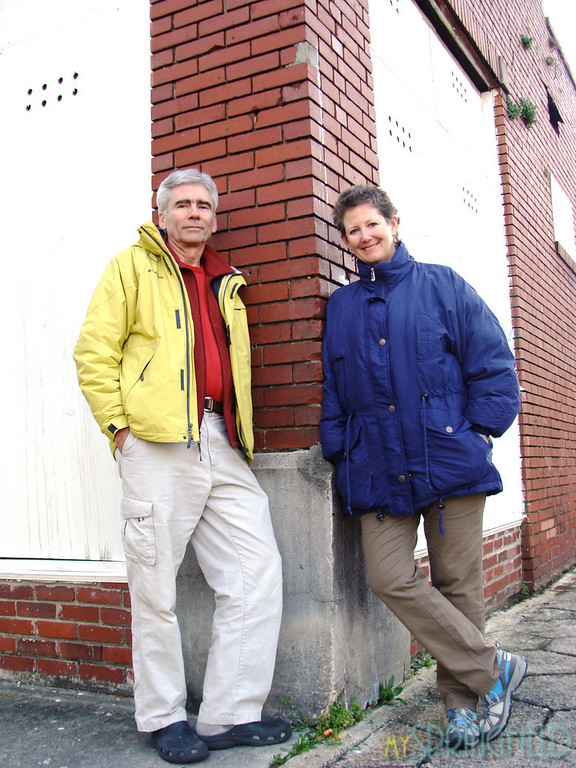 Occupation: Steve is a Civil Engineer and Lane is Executive Director of The American Institute of Architect’s Jacksonville chapter.

Lane: I’ve always liked Historic Districts and Springfield in particular, so I’ve been keeping an eye out for the right opportunity over the past few years. Besides the architecture, the neighborhood has an incredible sense of community, which was attractive to us. Plus, it’s closer to my work and kids. We live in Atlantic Beach right now, so it’s quite a drive.

Steve: We’ve been visiting the neighborhood off and on through the years, and have played around with the idea of moving to Springfield. About a year ago we became good friends with a couple that lives in the neighborhood who invited us to various Springfield events. Interacting with everyone at events and meeting people already living in the area made it an easy decision.

Steve: Neither, actually. We looked at both new and old houses, but didn’t see anything that fit all our needs. At the same time, we were very impressed by some of the commercial buildings that had been renovated, Three Layers cafÃ© and the residence at 12th & Market especially. Luckily we spotted a 1928, red-brick building and were able to buy it.

“Floyd’s Confectionary” was the original name. It was a grocery store. Through the years it served other uses, but now it’s been more or less gutted, leaving a blank slate for us to work with.

Q: How did you initially discover Historic Springfield?

Lane: I grew up in Jacksonville, so I always knew about Springfield. Once we had children, all of them went to some of the highly rated magnet schools in the area. So I would drive through regularly.

Steve: We’ve also had friends who have lived in the neighborhood. So what really turned me on to the area was visiting them and enjoying the neighborhood with them. For example, a few years ago we attended a New Years Eve party in the neighborhood. After the party, well after midnight, we were walking down the street down to our car. There weren’t people on every corner out to mug you, like we had heard about it. It was just a nice, quiet evening. When we drove off I admired all the Christmas lights on the houses, like any other typical neighborhood. That was the moment, for me, where I said, “Springfield is happening”.

Q: Do you plan on participating in any neighborhood events or organizations?

Lane: Absolutely. We haven’t even moved in yet, but are already members of the Woman’s Club, Garden Club, and SPAR Council. We’ve been to a Wine Society social a few First Friday parties. Oh, and we have a plot at the Springfield Community Garden on Laura Street too.

Steve: After we finish building out our home we plan on diving into more community affairs. Right now, our focus in on having a place to sleep!

Steve: Three out of our four kids are excited for us. One still isn’t so sure.

Lane: The architects I work with, especially the younger ones, are jealous of us. They wish they could find an awesome space in the area, like ours, to create whatever we want.

Q: How do you see the neighborhood evolving in the future?

Steve: Well, just in the few months since we’ve bought our property we’ve seen new construction homes rise, historic homes start to be renovated, and existing homes being purchased. There’s a lot of activity here. I see a strong community developing, even stronger than it is today.

Lane: We thought long and hard about this move. A few years ago, when the market was sky high, we couldn’t afford to make this move. Now that prices are reasonable, it was time.

Q: What advice would you give to anyone thinking about moving into Historic Springfield?

Steve: Come to a First Friday. Drive slowly through the neighborhood late at night. We did that quite a few times to make sure we weren’t going to be surprised with anything. We found it was just a nice, quiet neighborhood.

Lane: Every area of town has its issues. But it’s not the wild wild west that we’ve heard so much about in the past. That was the past, and it’s not a reality anymore. Like Steve said, it’s just a pleasant place to live, and getting better.