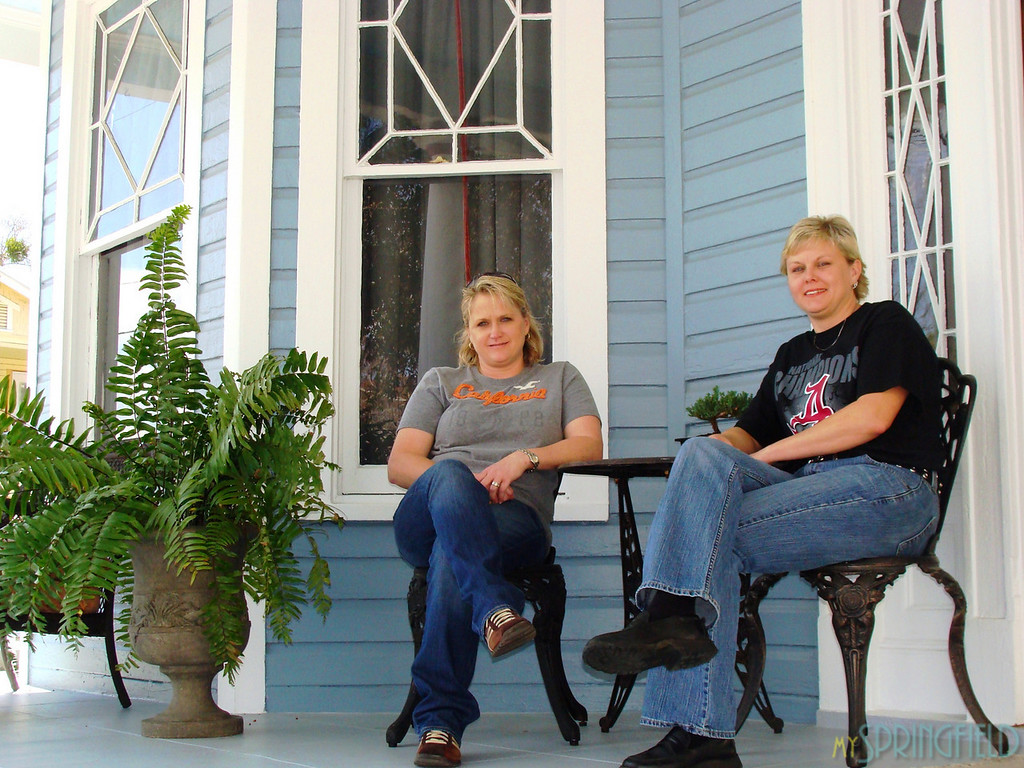 Fun Fact: Ashley and Felicia are passionate about animals; so much so that they create and sell their own line of natural dog treats and cakes. Check out www.thegourmentdog.com

Home prices fell like a rock during that time too, which didn’t hurt. So although we didn’t get in at the ground level, we feel that we bought early enough to see significant appreciation in the future. We bought this house in late 2009.

A: We looked at some of the new construction houses, and they were nice, but they didn’t quite have the character we were looking for. If we were going to buy in a Historic District, might as well buy a historic house, right? Our house was built in 1912. We got what we wanted.

A: My boss, a lifelong Jacksonville resident, said “No, No, No….You can’t!”

He knew the history of the area and what kind of things went on here years ago. But he hadn’t spent any time in the neighborhood recently, of course, so I invited him over to take a look. He was pretty impressed by what he saw. He was definitely surprised. Our visitors have been impressed, on whole. Of course there are still areas that need improving, but that’ll come. We’ve seen a lot of interest in the fixer-uppers on our street alone, which is great to see.

Q: What do you most enjoy about living in the neighborhood?

A: I love the fact that I know more of my neighborhoods here than I’ve ever known anywhere else that I’ve ever lived. We’ve lived in all parts of Jacksonville, and we didn’t see that anywhere else. And that there are all walks of life here, all types of people and personalities. The unifying interest, though, is this unique neighborhood that we all call home. Everyone supports the neighborhood reaching its full potential.

A: We’ve enjoyed taking part in SACARC (Springfield Animal Care And Rescue Club), First Fridays, the Home Tours, the Wine Society, and most of the public events. The Chili Cook-off, held a few months ago, was a really fun time too. There’s a lot to do in this 1x1 square mile neighborhood!

Q: How do you see Historic Springfield changing in the future?

A: The neighborhood has a lot of momentum right now, and I think it’ll keep improving. There are many renovations taking place and new homes being built; it’s exciting to see. Once the housing market recovers a little I think we’ll see even more happening. God love the people who started this process 15+ years ago, they deserve all the credit in the world. Like I said before, we weren’t sure about the neighborhood at first. But after spending time here, we knew we couldn’t leave it.

Q: What advice would you give to people considering making a move to Historic Springfield?

A: Actually, we just talked a friend into moving into the neighborhood. So we must give good advice!

The main concern everyone has when they are looking at houses in Springfield is about crime and safety. They hear about how it once was or they drive through and see beautiful houses next to fixer-uppers, and they want to know if they’ll be safe here, or if they’ll have to be worried 24/7.

Well, we’ve never felt unsafe or uncomfortable here, personally. A plant was stolen off of our porch once, when we were renting. Crime happens everywhere in this city, but just using good common sense is usually good enough here.

If a sense of community is important, and if living in a unique neighborhood is important, then this is the place to be, in our opinion. 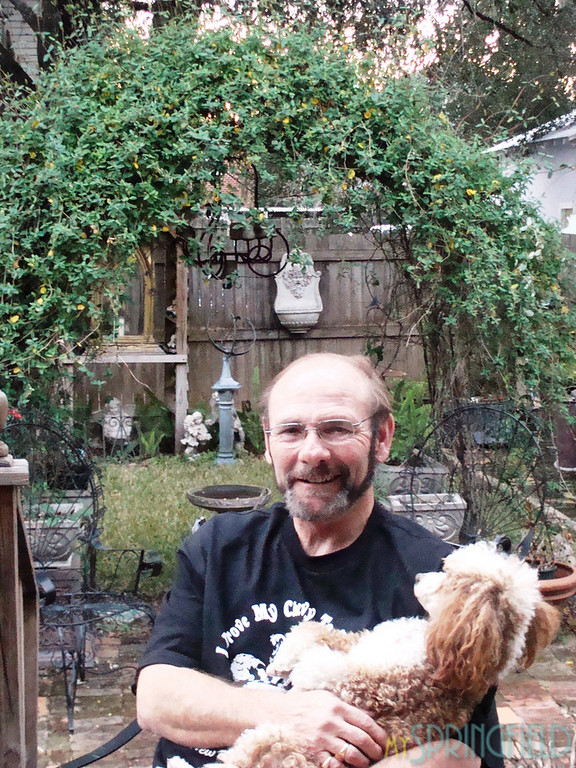 A: In 1995 my wife went one of the Home Tours we have in neighborhood, that’s how it all got started. We were living at beach. We had lived there for 30 years, but after my wife went on the Home Tour she caught the bug. While I was at work, she would drive from the beaches to Historic Springfield all the time to look at the houses. She begged me to go with her but I wouldn’t. She finally dragged me kicking and screaming into the neighborhood, and by that time it was too late: she had heart set on buying a house. And, well, we did. She got what she wanted. Of course shortly after we moved here, in 1996, I fell in love with it too.

A: Crime, plain and simple. I called it the knife and gun club. Five dead bodies turned up with in 50 feet of our house during the first year we lived here. We had boarding houses surrounding us with 16 to 20 people per house, living in squalor. Drugs and prostitution were everywhere. The house across the street from us had 500+ police service calls in one year alone.

The decent residents in the neighborhood had to take it upon themselves to fight the crime. JSO just didn’t get it. So I displayed my shotgun and bullet proof vest as needed….which was all the time. When the druggies and criminals figured out that I could shoot straight and wasn’t playing around, things got a little better for us. We came to somewhat of an understanding, I guess you’d say. Even so, I assisted the police with surveillance and arranging drug busts from right here inside my house. Those were wild times.

A: Crime is almost the complete opposite of how it was. I’d say down 95%. I mean, we still have crime here just like there’s crime everywhere else, but you don’t have to worry about the serious stuff now. Besides that, SRG has built some wonderful homes and more houses have been restored, too. New people, new blood.

Q: Does your house have a story?

A: It sure does. The house built in 1902. We bought it in 1996 for $37,500 cash. It was condemned and on it’s way to being demolished. The ceilings were caving in, the floors were plywood, the walls had holes in them, the wood was scorched in places, the mantles and banisters had been torn out, etc. You name it and it needed to be rebuilt. After we bought it, it only appraised at $16,000. So we were already in the hole from day one!

Well, I had restored a house at the beach previously, so I figured I could do it one more time. Every night after work I would drive in to work on the house. And when I wasn’t working on it, someone else was. Non-stop, dawn ‘till dusk. We worked our butts off on this house. And it paid off. Eight months and 250k later, it was done.

A: The diversity of the neighborhood. The beauty of neighborhood. Every house is unique in its own right. But most of all, the people. I’ve never felt such warmth and kindness from a group of people in my life. We’ve been through so much together, through good times and bad. Gay, straight, black, white, young, and old. I haven’t lived in another place like it.

And the location is great, too. Being in the middle of the city, you can jump right on the highways, cross any bridge, and even walk to the Jaguars NFL football games if you like. My grandson and I have walked from our house to the games several times.

A: I was chairman of the Shadco group, the community liaison to local law enforcement, for four years. In my opinion, it’s the best neighborhood organization out there. My wife worked with SPAR Council for a number of years, as well, as the treasurer. And we used to love the cocktail parties. But a few years ago I became very ill, and we had to focus on my health. So we let the newer residents take the lead. Thankfully I’m fully recovered now.

A: As long as it’s positive, it’s fine with me. More beautification, more restaurants, and more entertainment venues would be nice. You see that happening already, so I’d like to see it continue.

Q: Is there anything that you’d like to say to you someone thinking about moving into the neighborhood?

A: If you move in, here’s what you need to do: be a good neighborhood, get involved in the community organizations, and support all the good local businesses. That’s my advice.