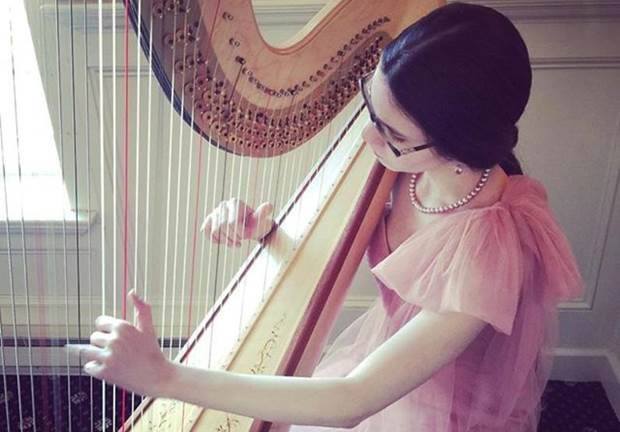 Arilyn Mitchell is a young harpist currently residing in Newport, Rhode Island. Her father is an active duty Navy Chief, and his orders have taken the family across the country and back, during the six years that Arilyn has been playing the harp. The frequent moves, which many would consider disruptive, have proved very beneficial, affording Arilyn many opportunities that she would not have had otherwise. She has been able to play in some of the top youth symphonies in the country, under legendary conductors, such as Steven Radcliffe, with the Seattle Youth Symphony Orchestra, Carter Simmons, of the Milwaukee Youth Symphony Orchestra, and most recently, Benjamin Zander, founder and conductor of the Boston Philharmonic Youth Orchestra.

The summer of 2015 was a busy one, with Arilyn performing at the Biltmore Estate, in Asheville, North Carolina, at the Dallas Arboretum, in Dallas Texas, and at the Lyon and Healy Awards Competition, in Logan, Utah. She was also selected as one of four participants in the Young Artists Harp Program, at the Boston University Tanglewood Institute, in Lenox, Massachusetts.

Arilyn has seldom competed, but she was a recent winner of the Stars of Tomorrow concert audition, at the Boston Harp Festival, and is a former first place winner in the Greater Chicago Area Chapter of the American Harp Society scholarship competition.

Her greatest joy is sharing her music with others. Doing school presentations, and giving benefit concerts, are among her favorite ways of giving back to the community.

Her own webpage can be found at www.arilynharp.com.