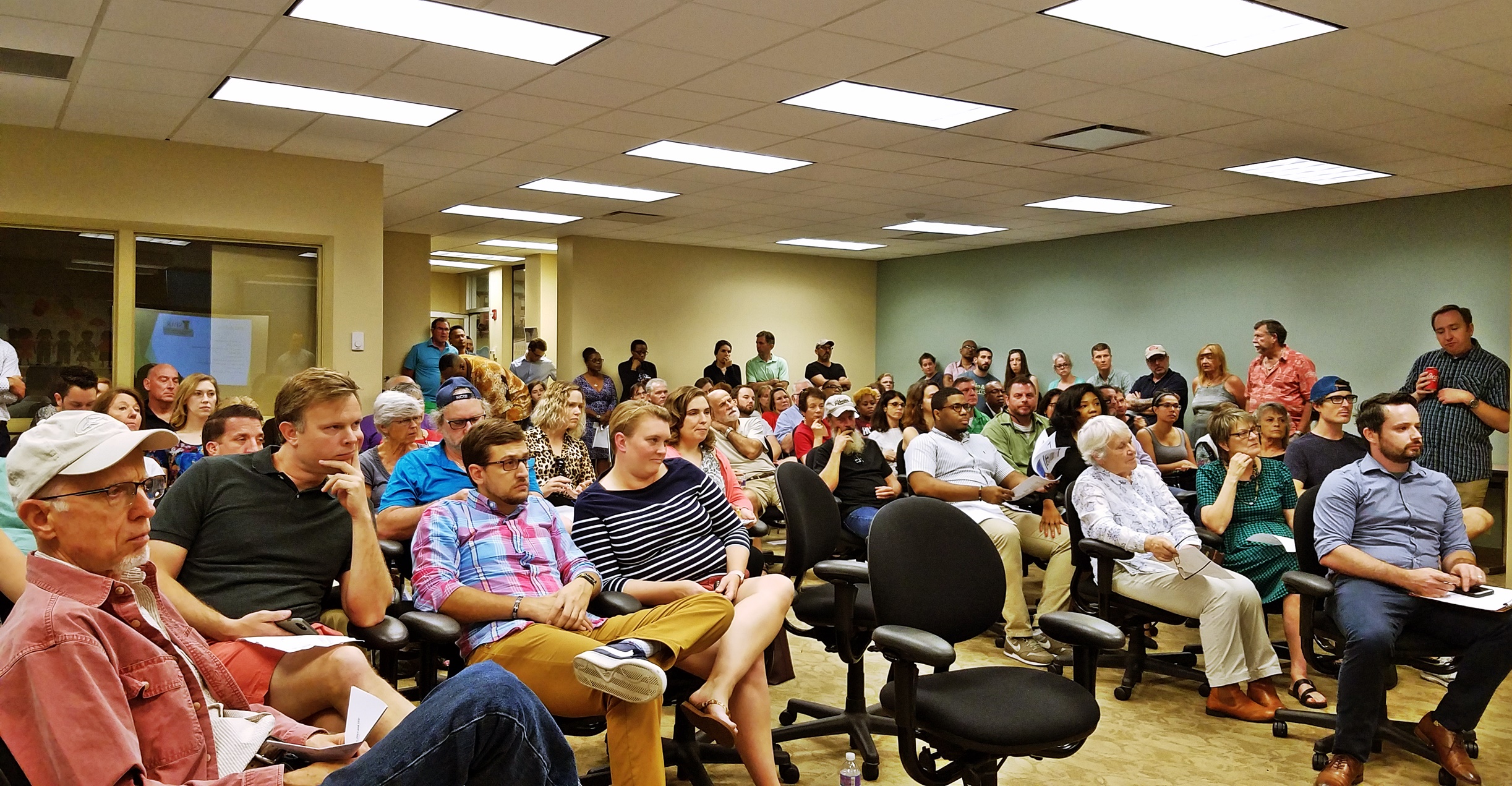 The meeting began with Todd Hollinghead, SPAR President, welcoming guests to the meeting, touching on the agenda and thanking Wells Fargo for use of their space. The first part of the meeting focused on providing updates about on-going work SPAR is involved with, while the second half of the meeting introduced representatives from City of Jacksonville Parks Department, Boys & Girls Club of North Florida and new SPAR Executive Director Kelly Rich.

A St. Patrick's Day Block Party on Main Street is being planned for March 17th, hosted by Crispy's Springfield Gallery restaurant & pub and Hyperion Brewing Company, with logistical assistance from SPAR. The 1700 block of Main Street (between 8th and 7th) will be closed for part of the day, allowing musicians and vendors to set up outside, with attendees walking between both sides of the street.

Also on March 17th, the annual Hogans Creek Clean Up event is being hosted by SPAR, with support from the St. Johns Riverkeeper and City of Jacksonville. As always, a lite breakfast will be provided, along with gloves, trash bags and litter pickers. Volunteers should meet at Klutho Park near West 2nd Street & Boulevard. The clean up will run from 9am to 11am. Volunteers are encouraged to bring kayaks, canoes, poles, poles with nets or other helpful items to snag trash and debris out of the creek.

Second Sundays in Springfield is returning on April 8th, 2018, with music, vendors and craft beverages, and will run from April to October. This year, the events will be held in the park in April and May, transition to the storefronts along Main Street during the scorching hot months of June to August (air conditioning!), then head back to the park in September and October.

The 40th annual Historic Springfield Tour of Homes is set for May 19th and 20th, 2018 with Southern Moss Realty as the title sponsor. Eight homes will be featured on the tour, all within walking or biking distance of each other - 5 historic properties, 2 new construction homes, and 1 commercial-to-residential loft featured. Tickets will be available in April, and the event will again be featured on the cover of Jacksonville Magazine's HOME edition. Volunteers who assist on the Tour will receive a free Tour ticket.

The SPAR building at 1321 North Main Street was severely damaged during Hurricane Irma, and office operations have moved to 1334 Walnut Street, Suite 1 in a temporary basis. Mail is being forwarded from the Main Street address to Walnut Street.

The West 4th Street restoration project, which SPAR successfully advocated for in 2017, will begin preparation soon. Study and engineering of the street is expected to take 6 months, with construction to follow. Once completed, West 4th Street between Main Street and Pearl Street -notorious for it's numerous potholes, dips & uneven sidewalks- will be renovated nicely, including reusing the historic paver road brick, preserving the historic granite curbs, and improving the sidewalks. New brick will be used to fill in spaces where the historic brick could not be utilized, making this stretch of West 4th a pilot project for returning brick streets to the Springfield Historic District.

The Springfield Merchants and Business Association (SAMBA), a committee of SPAR focused on supporting business vitality in the Springfield Historic District, explained it's facade grant program, and announced 2 new winners: Flour & Fig Bake Shop and Iben Lakay LLC, to make facade improvements to their storefronts on Main Street. Applications for additional facade grants will be accepted in April 2018. Kurt D' Aurizio, owner of Flour & Fig Bakehouse, provided a brief update about the progress of building renovation where the business is planning to open (Flour & Fig has since announced they are searching for another location in Springfield). Scott Adeeb, owner of the 9th & Main property, provided a brief update how technical environmental issues with the property have slowed his ability to secure financing to renovate the property into Strings Sports Brewery, but that he is hopeful both the environmental technicality and/or the financing will be resolved soon. Also, Atomic on Main, new home decor and retail business, announced it will be opening soon at 1715 North Main Street.

The role of SPAR's Design Review committee was shared, and how it can be a helpful resource and advocate when navigating the renovation and construction process with the City of Jacksonville's Historic Preservation Department. Also of note - a brief description of a meeting between Dollar General and SPAR, where SPAR provided feedback to Dollar General about their proposed site plan, building design and community sentiment/concerns.

After SPAR's updates, a number of guests were introduced:

> Crissie Cudd from Southern Moss Realty provided a real estate market update for the neighborhood. In short: property values are rising, homes for sale are going quickly, and the market is healthy enough for investors to renovate homes then sell for profit, which hasn't been the case in recent years.

> Colin Moore from the City of Jacksonville's Parks Department spoke about the status of Hogans Creek Greenway. The first two phases of the Greenway have been completed (a pedestrian trail connecting Springfield's parks to a series of other urban trails in the urban core of Jacksonville, once completed), spanning roughly Laura Street to West 7th Street following Hogans Creek. Next phases include connecting the pathway from West 7th to West 8th Street and removing barriers on JEA property near West 1st Street and Laura Street to allow the Greenway path to go through JEA property, as well. COJ funds will be available for landscaping improvements along the path and will be administered once future phases are complete.

> Joanne Kazmierski, Community Engagement Coordinator at the Boys & Girls Club of North Florida, presented plans for the large Boys & Girls Club property at East 10th and North Liberty to be renovated into the Citi Teen Center, including dance studio, cafe, robotic lab, game room, gym and other amenities appealing to Jacksonville teens. The renovations will be done in phases, including outward facade improvements. The eventual goal is to create an outdoor space suitable for special events, as well. The Boys & Girls Club presented similar plans in 2016 and have now secured funding to move forward. The renovations have recently begun, starting with internal demolition. They are targeting the end of 2018 to be complete phase 1 of the renovation.

Last on the agenda, Kelly Rich was formally introduced to the community as SPAR Council's new Executive Director. Rich shared her professional experience and personal passion for historic preservation, community revitalization and bringing people together. She described her work in her hometown of Shreveport, LA, including founding the Norla Preservation Project, serving as Executive Director of the Highlands Jazz and Blues Festival and her engagement with National Main Street Program. In her new role as Executive Director, some of her first priorities include learning the internal working of the organization and City of Jacksonville, along with meeting with community partners and neighbors. Rich has never lived in Florida before, and is eager to explore the city and greater Northeast Florida area. 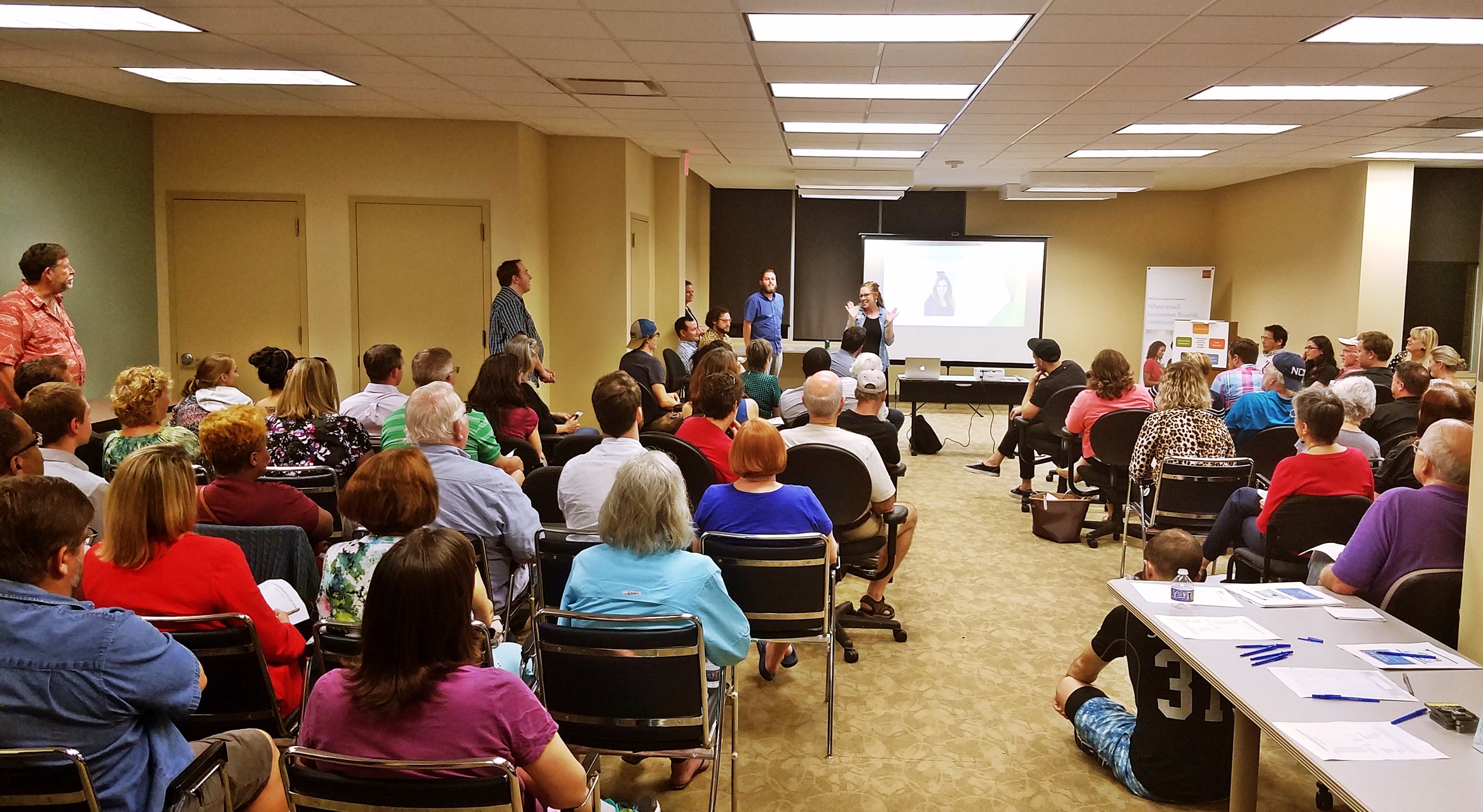