Meet Your Neighbors: Rouge and Cathy 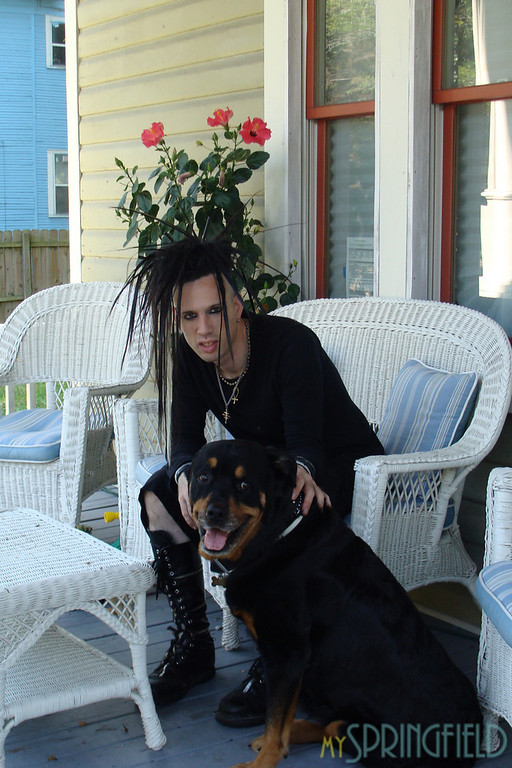 Occupation: Lead singer, lyricist, and founder of The Cruxshadows

A: We were living in Tallahassee and ready to move into a larger space. The bottom never really fell out of the housing market in Tallahassee, it’s relatively insulated as a college town, and we were looking to take advantage of the collapsed housing market. We found our house online by chance, and liked the size and price. I had lived in Jacksonville previously, during high school, and my parents still do, so moving to Jacksonville was something I was comfortable with. So the house itself was largely the reason we moved here.

Q: Did you purchase an old or new house, and how did you know it was “the one” ?

We really liked the large spaces. That was a must. It’s an amazing house. It house was renovated recently, which is nice, but the guest house needed a full remodel. Just finished up with that. I guess you could say we fell in love with the house, and just moved in a few months ago in May.

Q: What do you enjoy about living in neighborhood?

A: Quite a few things. The location seems to be pretty central in Jacksonville, so we’re not too far away from anything.

I like the amalgamation of people in the neighborhood; the yuppies, artists, people that have been living here for a long time, etc. It’s a little bit more like city living, but not exactly. Jacksonville doesn’t have true city living, but this is relatively close. There’s much more space available here, for example.

Mail is delivered by foot here, and that doesn’t happen in most neighborhoods these days. The mail comes to your door, you see him, he sees you, you talk. In most other neighborhoods, the mailman never has to get out of his car. So the personal interaction here is something I enjoy as well.

Q: Do you participate in any of the neighborhood events or organizations?

A: I’ve joined SPAR Council and we’ve attended the last three First Friday parties. That’s the extent of it so far. We want to be more active, but we have rather unusual schedules, so we can’t make as many meetings or events as we’d like.

Q: What did your friends and family think about the move?

A: As I said before, my parents live in Jacksonville, on the Southside. When I first mentioned it, they were apprehensive. After looking into it, however, they were extremely supportive.

Q: What changes would you like to see in the neighborhood, going forward?

A: I have a lot of thoughts on that.

And, of course, more businesses in the main commercial corridors. We have quality and unique  venues outside the commercial corridors, but the main store fronts are mostly empty. Having more active store fronts, something besides tax prep and pawn shops, is essential. Retail, galleries, cafes, theatre, etc. A clustering of businesses to create a better sense of place.

Main Street is in a very good position to be a cultural hub in the city, similar to San Marco Square and Five Points, but people need to step up and make it a reality.

Q: What advice would you give to someone considering Historic Springfield?

A: Springfield is a great opportunity. There are amazing deals on houses here. But if you are looking to buy a house as an investment only, then you’re interested for the wrong reasons.

There’s great value and in the homes, neighborhood, and community, but it requires people that want to live here.

So come with a discerning eye on the present, but an eye towards the future as well, and eventually this will be a place where everyone wants to live, as it once was. 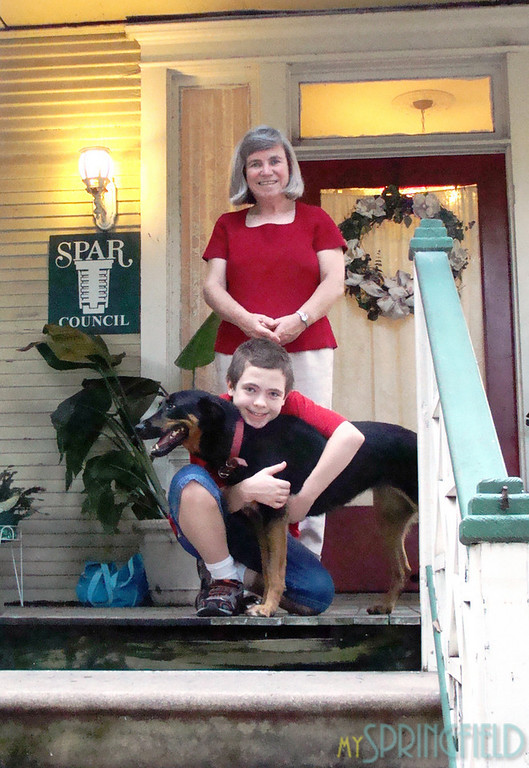 Occupation: Cathy is an Accountant. Her son, Ian, is a student at The Greenwood School.

Fun Fact:  Ian’s cousin, Mike Campbell, is the lead guitarist for Tom Petty and the Heartbreakers.  Which means that, when Ian attends a concert, he gets to go backstage and hang with the band.

A: I moved to Jacksonville in 1985, from the Florida Panhandle. I was raised on the beaches of Panama City, and then went off to school at Florida State in Tallahassee. I moved to Jacksonville because my aunt lived here, in Riverside, and she had a nice couch for me to sleep on until I found a job. My aunt and I both loved historic neighborhoods, so we enjoyed spending the weekends driving around those areas in Jacksonville. That’s when I found Springfield, prior to it becoming a National Historic District.

It was really scary then. We would drive through the neighborhood and marvel at the houses, but at the same time I couldn’t gather up the courage to move here. But I met a woman named Joyce Holbrook one day, a true neighborhood pioneer, and she convinced me that it didn’t hurt looking. Just looking, I told myself. Obviously I did more than just look, though. I bought my house in 1989 for 29k.

A: Just getting into to look at houses was challenge. First of all, everything was cash deal. No financing was available. Second, you needed to bring a crow bar, flashlight, and a dog to look at a house – so many were boarded up and abandoned with who knows what living in there.

The other challenge was the crime. My mother was living with me at the time I bought the house, but she wouldn’t make the move with me. And I don’t blame her; it was rough. Shootings were common. Drugs dealers and prostitutes were common. Bullets hit the side of my house one time. I was scared to sit out on my front porch of my own house!

A: There were very few families and children in the neighborhood back then. Very few that you would feel comfortable with your child playing with, at least. It was not a very family-orientated place. If you saw someone walking down the street, there was a good chance it was a prostitute or a drug dealer. Like others have said, it was the Wild Wild West…..not a place to raise a family.

Now we have lots of families and professionals in the neighborhood. Good people that have put their money where their mouth is. It’s still getting better now, even in this tough market. Now when you see someone walking down the sidewalk, it’s probably just a mother pushing a stroller or someone walking up to the corner store.

Q: Does your house have a story?

A: Back then, most houses never officially hit the market, everything was for sale whether it had a sign in the yard or not. Joyce, whom I mentioned earlier, just told me to make a list of my favorite houses and then we would see which one’s could be bought. Two others were sold just before I could get them, so I “settled” for my 3rd choice. It’s a 1904, three story, 3500 square foot house with a wrap around porch and so much character that I bought it twice. Yup, twice.

I originally bought it in 1989, and it was a wreck. Garbage up to your knees in every room. Black streaks across the walls, broken plaster everywhere, and a sink and refrigerator in every bedroom. I cleaned it up as best I could, and started doing demo work on it. A few years later in 1991, my husband at the time, who was in the Coast Guard, was transferred, so we had to move. I sold my house to a neighbor for a loss.

When my husband, at the time, left the Coast Guard we moved back to Jacksonville. This time to Arlington. One day, he said, “I must be going crazy, but I miss the old neighborhood”, referring to Springfield. I was secretly hoping we would move back, so I was thrilled. I called the neighbor who I sold my house to, and he was willing to sell it back to me. So we bought it again, and moved here again in 1995.

To my dismay, the house had been damaged even more. That’s when my restoration efforts began. I did most of the work myself. The house was restored, paycheck-to-paycheck, one project at a time. It was daunting, but by focusing on just one project at a time I never was overwhelmed. The restoration took 11 years. I just finished 4 years ago, in 2006. During that time, my son Ian was born and I was divorced. Of course I could have hired a contractor, but I wanted to do the work myself.

Q: What did you enjoy about the neighborhood when you first moved here in 1989?

A: The houses. In ’89, that’s about the only thing you could enjoy! Of course, the pioneers were all good people. If you needed something you could count on them. SPAR Council would organize “work parties”, where fellow pioneers would help work on big renovation projects in someone’s house. Those were fun too.

Cathy: Well I still enjoy the houses, especially now that so many have been restored. The new houses are nice too. But the people are what really make it special.

I know neighbors. Not just the people living beside me, or on my block, but neighbors that live 8 blocks away. There are so many events, organizations, and activities you can get involved with. So much to do.

Ian: I like to feed the ducks in the park, work with the SACARC (Springfield Animal Care and Rescue Club) animals, and ride my bike.

A: I was a founding member of SACARC and am still very involved in that. I’m also a member of SPAR, the Woman’s Club, and Shadco. I try to get to as many meetings as I can, but SACARC is my passion.

Q: What do you hope to see happen in the neighborhood going forward?

Q: Is there anything that you’d like to say to you someone thinking about moving into the neighborhood?

A: This is not a vanilla, “Beaver Clever” neighborhood. It’s funky and flavorful. So if you’re intimidated by a homeless person walking through the neighborhood, then don’t even bother.

If you want character, personality, community, and opportunity, then you’ll probably like the Springfield Historic District.